Vietnamese Food: The Quintessence of Culture

When it comes to Vietnam, cuisine is always a topic that gets the most attention. Vietnamese food is not only dishes but also a natural, cultural feature formed in life.

Each ethnic group, nation, the cuisine is also a spiritual culture. Food culture will show the dignity of people, the cultural level with the morals, rules, customs in the way they eat.

With a country with a long history and different geographical areas, each region in this country has its unique foods and specialties that cannot be mixed.

So that, let’s discover a little about Vietnamese food and its richness!

What is Vietnamese Food?

Vietnamese food is based on the premise of combining culinary spices, processing processes, and general eating habits of ethnic and Vietnamese people. It does not refer to complexity.

However, it is this simplicity that has resulted in the sophistication and variety of each location. 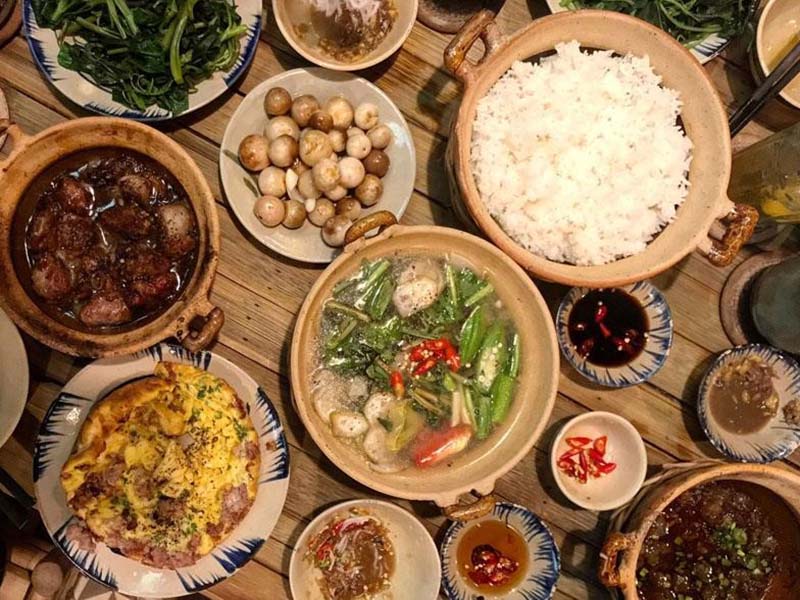 Vietnam is an agricultural country in a hot country with a tropical monsoon climate. Furthermore, the country is separated into three major regions: North, Central, and South, as well as 54 ethnic groupings.

As a result, each location has its own individual characteristics and tastes. It adds to the variety and depth of Vietnamese food.

However, research has revealed that Vietnamese food has nine distinct characteristics:

As mentioned above, Vietnamese cuisine is divided into three regions as follows: 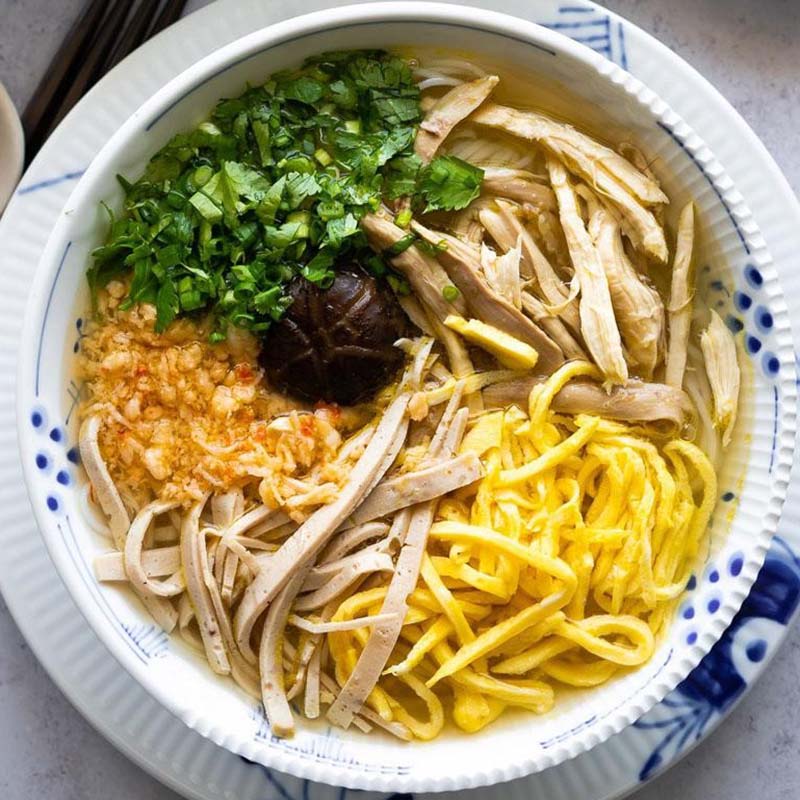 Northern cuisine was less prevalent, with the main ingredients being meat and fish in the past due to the old legacy of poor agriculture. Therefore they frequently employed a lot of vegetables and easy-to-find freshwater aquatic products.

The special dishes can be mentioned such as Hanoi Pho, Bun Cha, Bun Thang, Spring Rolls, … 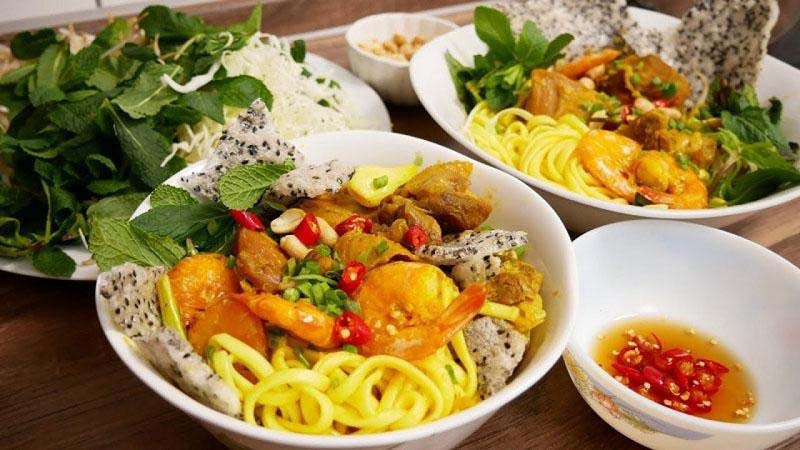 The spicy flavor is the most notable aspect of Central meals, which combine various ingredients to create a dish that is rich in color and flavor. Hue, especially, is regarded as the birthplace of Central cuisine.

Hue cuisine is influenced by the royal culinary style. Hence it is highly refined in terms of preparation and presentation. However, because royal cuisine necessitates a huge number of dishes, each type of food is prepared in a range of different meals. 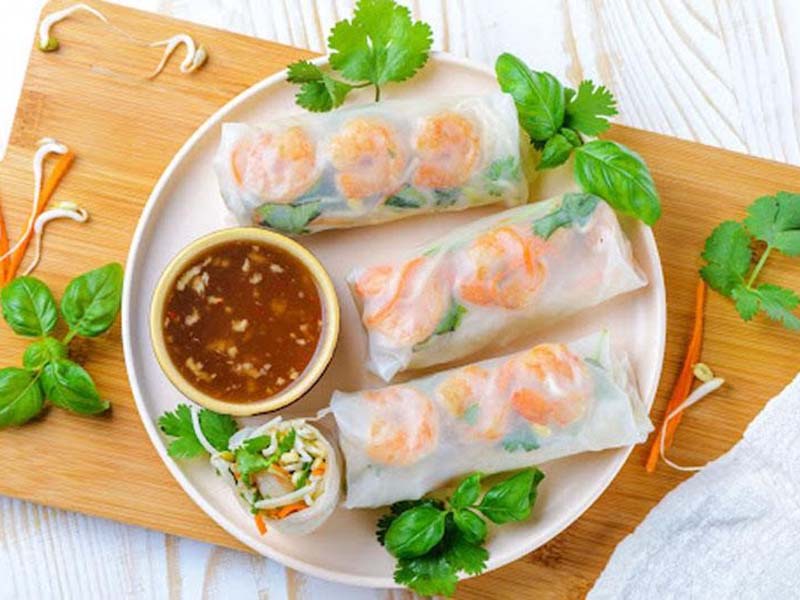 This place is heavily influenced by Chinese, Cambodian, and Thai cuisine, so Southern cuisine tends to be sweet and sour, often seasoned with sugar and using coconut milk to create a fatty taste. Southern cooking is typically more affluent and sweeter than northern cuisine.

Not only that, but the South boasts several well-known delicacies that you should taste when you visit, such as spring rolls, Bun Mam, Nam Vang noodle soup,… and the iconic broken rice dish.

Vietnamese Food Near Me – Where to Eat

There are so many fantastic places to eat in the Vietnamese restaurant near me. But I always enjoy hunting down new restaurants. Here are some of my current favorite places for Vietnamese food near me, listed geographically from north to south along the coast of Vietnam. If you are ever visiting any of these cities or towns on your travels around Vietnam please check out these great places that I have had the pleasure of trying lately. Some may be familiar, others not, but all equally worth a visit if you’re craving real authentic Vietnamese food! Enjoy!

5 Vietnamese Food That You Should Try

These dishes are culinary icons of Vietnam, beautiful to tourists, and you should definitely try it once: 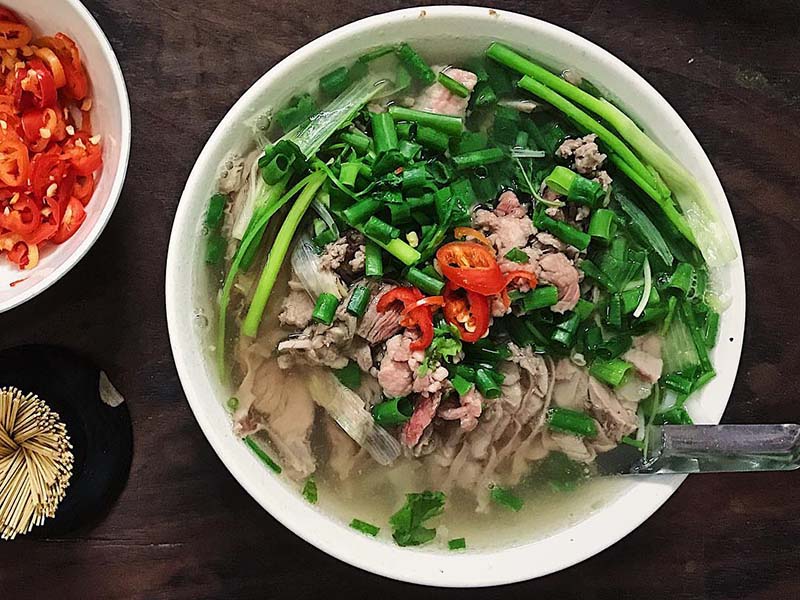 Fresh herbs, clear broth, and supple noodles are the three essential components of an excellent Pho dish. It has an ethereal herb flavor, the sweetness of bone broth, the pungent aroma of grilled ginger, the spicy flavor of chili peppers, and the softness and chewiness of the noodles.

You can have Chicken Pho or Beef Pho at any time of day or season. It’s ubiquitous, from roadside pubs to high-end eateries. In particular, when talking about delicious Pho, people immediately think of Hanoi. 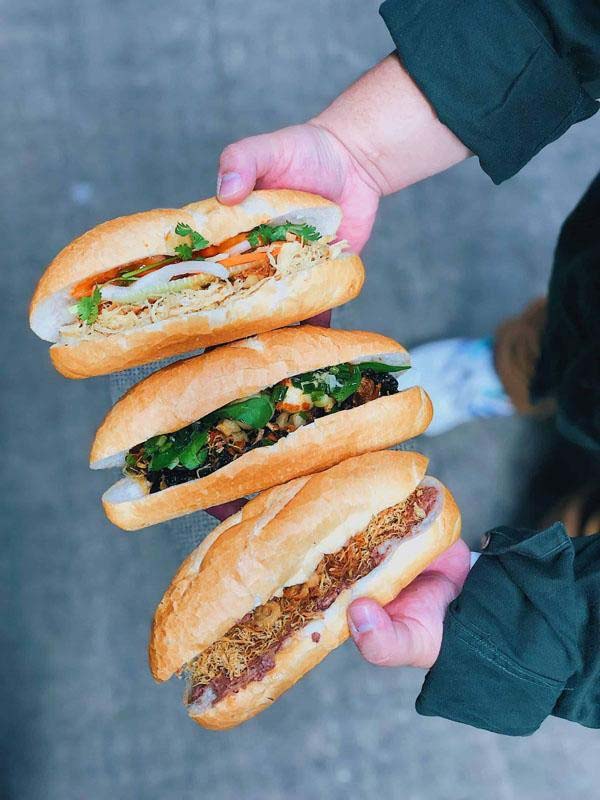 Banh Mi is a typical example of Vietnamese cuisine. It is a harmonious mix and match of ingredients, spices, and cultures. This dish frequently appears on lists of the world’s most delectable foods compiled by famous foreign magazines and websites.

Banh Mi’s distinguishing trait is its thin, light, crispy bread. Add to that the variety of many different components, all of which provide the best taste. Banh Mi can be filled with various items such as burgers, pate sandwiches, spring rolls, fried eggs, or sausages… Visitors can select from a range of fillings such as pate, omelet, grilled meat, and so on.

Popular foods are commonly available in any tourist destination in Vietnam. However, the most famous Banh Mi is found in Hanoi, Nha Trang, Hoi An, and Ho Chi Minh City. 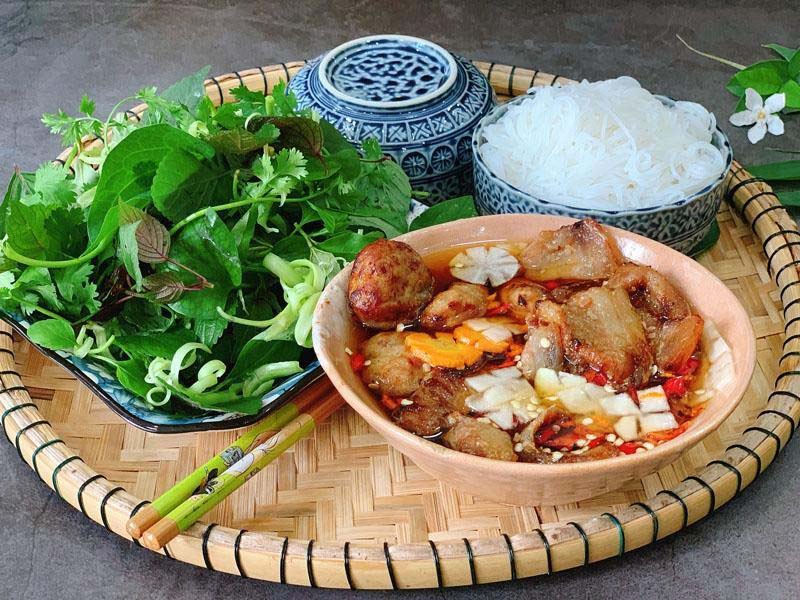 Bun Cha has long been a favorite dish in Northern Vietnamese cuisine. It used to be in National Geographic and CNN’s lists of the most incredible street food and Asian cuisine.

Bun Cha is the ideal marriage of two dishes: grilled pork buns and salad. Grilled pork buns are divided into two types: balls or chunks that are marinated with spices and then grilled on embers.

They were accompanied by rice noodles and a huge bowl of concentrated broth with diluted fish sauce with sour enough, spicy, salty, and sweet flavors, topped with salted and vinegar-soaked pieces of carrot kohlrabi, or thinly sliced green papaya.

Especially, this is also a dish that former President Obama enjoyed and praised when he arrived in Vietnam. 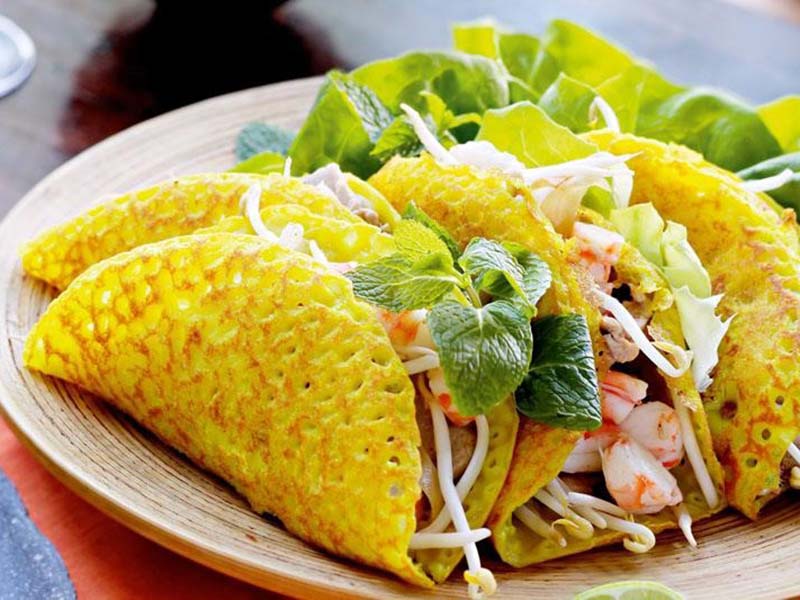 Banh Xeo is a well-known meal in three regions, although the differences between Banh Xeo in each area are based on size and content. It gets its name from the noise it produces when cooked.

Banh Xeo is a sort of cake with a distinctive yellow hue and a crispy dough outside, inside with bean sprouts, beans, beef, and shrimp in a round form that is then folded into a semicircle and garnished with vegetables. Most Vietnamese meals have a fragrant flavor.

People commonly eat it with veggies wrapped with cut into bite-sized slices of Banh Xeo, then dipped in a dipping sauce.

Banh Xeo has evolved, with each location having its own distinct characteristics, such as tubers and taro in the north. Southern pancakes are huge and loaded with sweet and sour fish sauce, but Central area pancakes are the size of an adult’s hand, with few fillings, and the sauce is a broth with grilled meat filling. 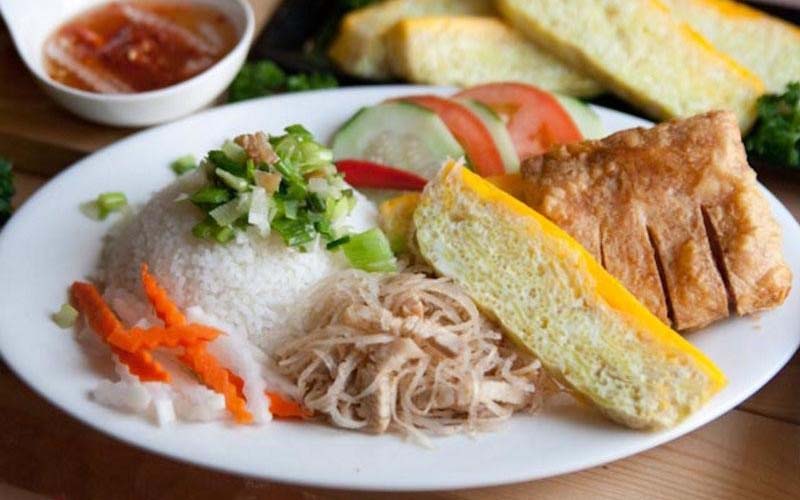 This is one of the most popular dishes in South Vietnam. It will usually be served with a small bowl of fish sauce on the side.

Rice is made of broken rice and served with barbecued ribs, an omelet, spring rolls, skin, and fish sauce. A tender pork cutlet is roasted over hot coals for a smokey, deep flavor.

The broken grain is the essential component of Broken Rice. Broken rice is the first section of the rice grain that is broken during the milling process; this is the main element in Saigon Broken Rice that cannot be replaced by any other ingredients.

Because broken seeds are highly fragrant and sweet, and broken rice is cooked neither too dry nor too mushy, it will be spongy and never dull people.

You can watch this clip to know more about some famous foods in Vietnam:

It is a generic representation of Vietnamese food. From here, we can see that it is pretty diversified, with many new sorts of food being generated.

Vietnamese food is a vibrant image, reflecting the distinct identities of each ethnic group and location while retaining the same Vietnamese character and soul. The national flavor is irreversible.