Spain has some of the best food in Europe. Of course, this is a bold claim to make about any country with such diverse culinary traditions as France or Italy. But Spanish cuisine is rich and varied enough to deserve its place among the world’s great cuisines.

Spanish cuisine varies greatly within the country, between regions, and even within cities, where specialties vary from street to street. Typical dishes are gazpacho (a cold vegetable soup) and paella (a rice dish).

Spanish food has become popular all over the world. Not only do Spaniards themselves eat lots of it, but tourism has spread its fame. Spanish restaurants can be found in many places outside Spain, and dishes such as paella and tapas have been adapted to suit the tastes of foreign communities.

This article will give you the must-try Spanish food with simple recipes in 2022. Check out!

Embrace the late and slow tempo of Spanish cuisine. You may not be able to start your adventure right away, but don’t worry because it’ll happen eventually! Your first step is a belated lunch – Spain’s largest mealtime for most people who live there (it can include breakfast too). The tapas will make up for any lost time as we taste our way through these must-try dishes while exploring three incredible cities: Barcelona, Madrid & Seville.

The most famous dish in Spain-paella-may be hard for many Americans to pronounce, but it can’t be missed on any visit to Madrid, Barcelona, or Valencia. The dish was born of necessity when rice became part of the Iberian diet after being introduced by Arab invaders centuries ago.

Paella combines rice with meat (chicken, pork, or rabbit), seafood (typically shrimp), and vegetables like peas and artichokes. If you’re going to eat paella in Madrid, be prepared for a wait at most restaurants.

Mastering the art of eating paella is not an easy task: you’re supposed to use a spoon and fork together, separating a bit of rice from the bottom, then using the spoon to push it onto your fork while you use your knife to cut whatever else you’ve speared.

You’ll find Chorizo all over the Spanish-speaking world, but you can’t go wrong with this hard, cured sausage that’s typically made from pork and seasoned with smoked paprika (Pimenton dulce).

It comes in varying degrees of spiciness depending on which region it comes from, but it’s never overpowering. Add a little chorizo to a fried egg, and you’ve got a great breakfast!

Another staple of the Iberian diet is morcilla, which means “blood” in Spanish. It’s sort of like a pig’s blood sausage-look for it in supermarkets during the winter.

It’s used in all types of dishes, from appetizers to main courses and desserts. The most famous dish with morcilla is probably blood sausage with rice (morcilla con Arroz), which you’ll find at Madrid restaurants specializing in traditional Spanish food.

Tortilla Espanola is essentially an omelet made with potatoes, eggs, and onions. You’ll find it everywhere in Spain–the Basque Country is known for its version with spinach, while the Valencian variant includes sausage. It’s usually served warm as a tapa or cut into wedges that you eat like chips.

This little green pepper is a Spanish staple that’s served everywhere from tapas bars to supermarkets. It’s traditionally a mild chili pepper, but you can find them in all sorts of heat levels at local supermarkets and specialty stores. There are many recipes for dishes with Guindilla–you may have even seen them roasted and canned.

Spain has a rich history of preserving condiments that were used during the Roman Empire to season food. Most supermarkets will carry varying types of these, including spicy ones like Picante or pasilla, but you’ll also find them in specialty stores. They come in all shapes and sizes-liquid, powder, or jelly form-and their uses depend on the region.

This cold, raw soup is a favorite in Andalusia and southern Spain-it’s made with garlic, olive oil, tomatoes, and cucumbers, among other ingredients. It’s not just for summertime-gazpacho is refreshing no matter what time of year you eat it.

Gazpacho is usually served as a cold soup, but there are some regional variations-in Seville, it’s served at room temperature and topped with prawns.

The name of this dish-which refers to small green peppers that are pan-fried and sprinkled with salt-means “Padre’s peppers” in Spanish, as monks often make them. They’re best enjoyed as a tapa at bars around Madrid.

You can find them in most supermarkets, where they come in two varieties: the fat ones and the skinny ones (Choriceros and chicharrones).

A taste of Spain is coming to your home. These three dishes will bring the bright flavors and easy preparation of this country into yours: 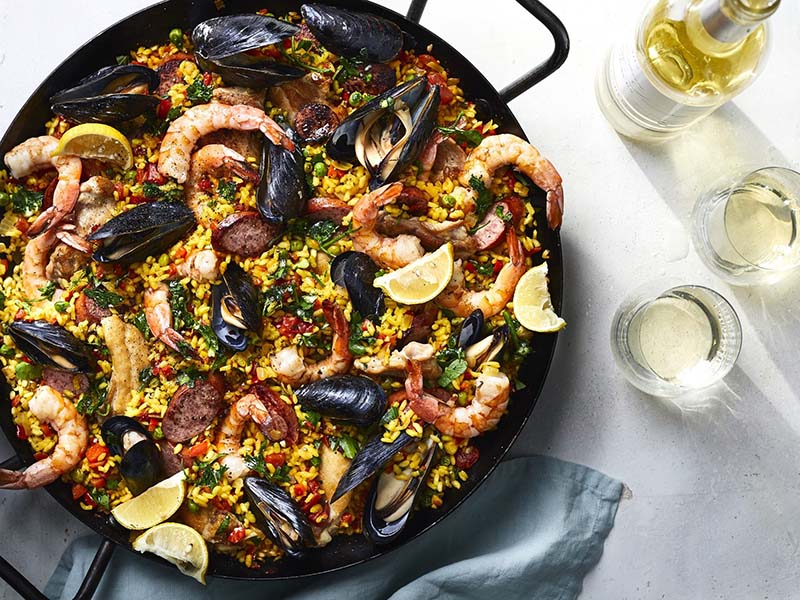 The most famous of all dishes in Spain is paella. Paella is one of the dishes most like the original dish made by rice farmers in Spain. It has two varieties, Valencian and Spanish. A Spanish paella typically includes more vegetables than its Valencian counterpart.

Heat the oil over medium-high heat in a paella pan or large skillet. Add chicken and cook until lightly browned on all sides (about 5 minutes). Remove with aslotted spoon and set aside.

Add artichoke hearts to the pan and cook for 3 minutes. Add saffron with the water (or broth) and salt to taste. Bring to a boil and add tapioca, frequently stirring until thickened (about 2 minutes).

Return chicken and any accumulated juices to the pan. Stir in shrimp, peas, and green onions; cover and remove from heat. Let stand until shrimp are opaque in the center, about 5 minutes. 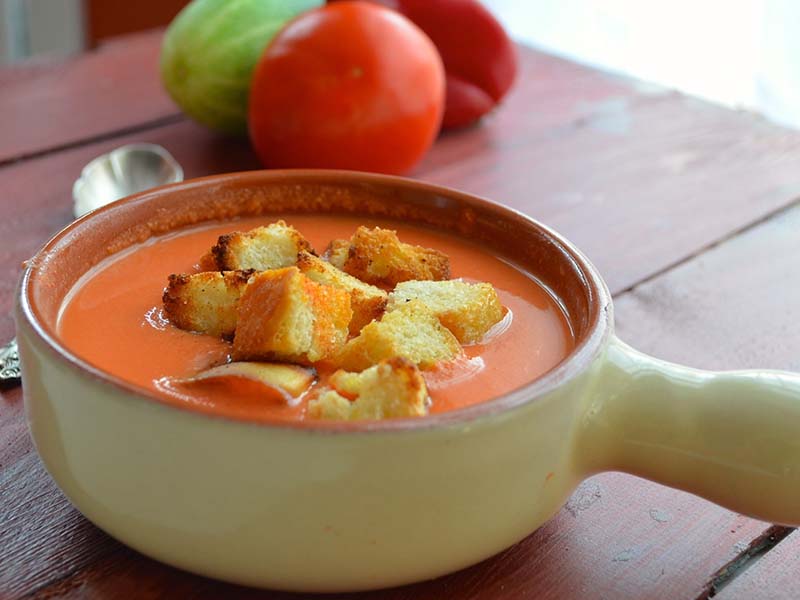 Spanish food recipes also include gazpacho, a cold tomato-based vegetable soup typically served with bread croutons and garlic. It is made of tomatoes, cucumber juice or pulp, bell peppers, onion, wine vinegar or lemon juice, olive oil, salt, and pepper. There are many ways to make gazpacho, depending on the region of Spain in which it is made.

Put the tomatoes, cucumber, pepper, and garlic in a blender or food processor and give it all a good whizz to make a paste. Add the onion, coriander leaves, olive oil, and lemon juice, and blend to combine. Add salt to taste (about 1/2 teaspoon). Pour into a large bowl or jug & chill for at least 3 hours.

Just before serving, add the ice cubes and stir well till they have melted. If the soup is too thick for your liking, just add some cold water to thin it out. The idea is to have a thickish soup, like cream of tomato soup. Chill again for another hour before serving. 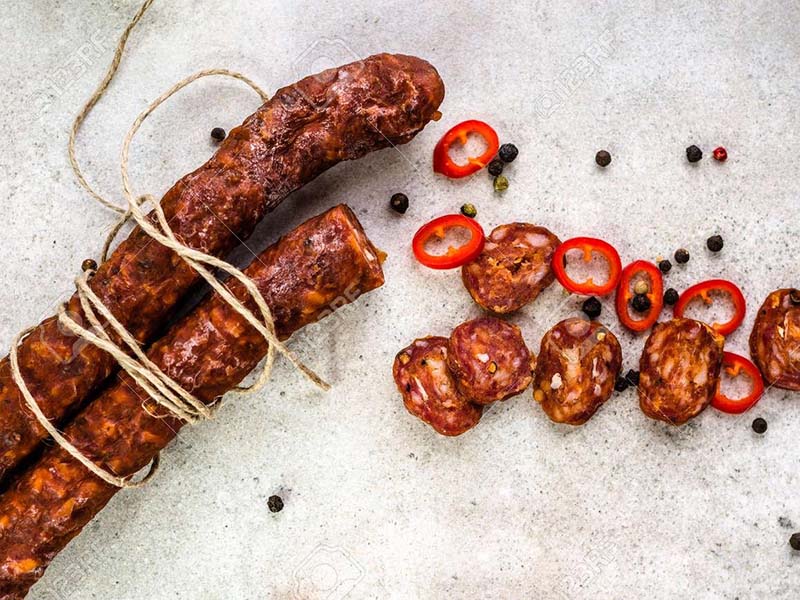 There are many ways to cook chorizos, but the best is baked. This way, you will get a perfect taste of spices and meat together.

For the Chorizo’s dough: put half of the chopped onion in a saucepan with some olive oil and let it fry until golden brown. Once this is done, add the chopped garlic and the ground pork or other meat (beef or veal), constantly mixing until the color changes.

Next, add salt, pepper, and paprika and keep mixing until everything is well combined. Add wine and cook again for a couple of minutes. When you see that all the water from the meat evaporates and it becomes denser, pour boiling water (not more than one liter), constantly stirring until it mixes with the previous ingredients.

With the saucepan in medium fire, add chopped parsley and mix well. Also, add the pieces of ham and smoked bacon and mix again until all ingredients combine with the meat.

The last step is to add pieces of chorizo sausage to the mixture and stir until it mixes with everything else. Once this is done, let it cool.

Now you can start making the chorizo dough. Cut the provolone cheese in half (lengthwise), and take out the first skin of the cheese (the one attached to both halves), taking it with your hands slowly until you separate both parts of the cheese.

Now cut this first skin into little pieces approximately 1 cm long. Put some dough on one of the halves, then put one or two pieces of skin (depending on the size) and cover with more dough. Do this until you don’t have any skin left (the skin is used to protect the Chorizo while it cooks).

Now take some toothpicks and make sure all of the pieces are now inside the dough. Do this for all of the chorizos and leave them aside.

Now you need to make some incisions in the boiled potatoes, put them on a tray with salt, pepper, garlic powder, and olive oil.

Mix everything well with your hands until they absorb all flavors. Put the tray with the potatoes inside the oven (180°C) and let them cook until they are golden brown.

Once this is done, take out the tray with the potatoes and put them aside for now. Now you need to make the sauce which will go over the chorizos. Take one glass of white wine and reduce it in a saucepan over medium fire. Then add one beaten egg yolk and mix well, then add salt to your taste.

When you see that the sauce thickens up, stop mixing it with the spoon and start mixing it with a ladle until all ingredients are combined. Take off the fire and set it aside for later use.

Now take an oven tray and put some olive oil on it. Put the chorizos inside this tray, pour the sauce you made before over each Chorizo (you might not need all of it), and place in the oven for 10 to 15 minutes or until the top of the dough gets golden brown.

Once this is done, take it out of the oven and serve with pieces of boiled potatoes and garlic bread. Enjoy!

Why is paella popular in Spain?

Paella is a dish that was created in the Valencia region of Spain. This dish may have been named for the pan in which it’s made, called a “paellera.” As Latin food became more and more popular worldwide, paella (made with native ingredients) became somewhat synonymous with Spanish food and cooking in general.

Is saffron used as an ingredient in a traditional Spanish Paella dish?

What does the name “Spanish omelette” mean?

The word “omelette” originally comes from French, “egg-based cake with various fillings.” In Spanish, this dish is called a tortilla española, which means “Spanish omelette.”

What type of sausage is used to make Chorizo?

The Spanish word “Chorizo” can be found in English dictionaries equivalent to the English term “Sausage.” However, the word Chorizo is usually associated with spicy sausages of Spain and Latin America.

Spanish food is a popular cuisine in many countries. It has evolved since the time of Columbus and continues to evolve with influences from other nations today. From paella, patatas bravas, tortilla española, chorizo con huevos to bacalao al pil-pil; there are so many ways that you can enjoy this delicious culture!

All these Spanish dishes have one thing in common: they’re made using fresh ingredients and lots of love, making them healthy for your body and tasty on the palate. So if you want some new flavor combinations or just need something different than what’s been served at home lately, give traditional Spanish cooking a try!