How long do you freeze ice cubes in the freezer? If your ice cubes turn into frozen sludge and never fully freeze, you’re not alone. A lot of people have run into this issue where the water freezes, but the cubes don’t. The reason for this is usually because there isn’t enough time allowed for the water to freeze. If you are wondering how long to freeze ice cubes, I can tell you right now that it is going to depend on a few variables.

Contents show
How Long To Freeze Ice Cubes?
Factors Affecting The Speed Of Freezing Cubes
Refrigerator temperature
The size and shape of the ice cubes being made.
Type of water
Water purity
Material of the container
Tips To Freeze Ice Cubes Faster
Make The Ice Trays Wet
Pre-Chill Your Ice Cube Trays
Use Hot Water
Stick Your Tray in the Freezer Upside Down
Keep Your Freezer Colder
Use a Plastic Tray
Add Salt or Alcohol
How Long Do Ice Cubes Stay Frozen?
Size of the ice cube
The temperature of the freezer
How many times the freezer door is opened.
Conclusion

This question is often asked by people with a refrigerator that has a freezer compartment. The actual amount of time varies depending on the size of the ice cubes and the strength of your freezer. Standard ice cube trays create cubes that are about 1 inch wide. In a standard freezer, that size of ice cube will take about three to four hours to freeze. Larger cubes will take longer, and smaller cubes will freeze more quickly.

There are several factors that determine how long ice cubes will take to freeze in the freezer.

Ice freezes faster in a cold environment than at room temperature. Ice cubes freeze faster when the refrigerator is set at lower temperatures than at higher ones, according to a study by Scientific American. The colder the water, the faster it freezes.

The size and shape of the ice cubes being made.

The larger the size and bigger the surface area of an ice cube, the longer it takes for it to freeze fully. A tray filled with small cubes will freeze faster than one filled with large ones. This is because water tends to expand once frozen; therefore, more surface area means more expansion, which causes water to take more time to freeze fully. Thermodynamics dictate that heat transfer occurs at a greater rate from a larger surface area than from a smaller one. The same principle is applied when freezing ice cubes in trays.

The rate at which ice melts is affected by the type of water used. Water that contains impurities or dissolved particles takes longer to melt than pure water. For example, sea water takes longer to freeze than fresh water because it contains more dissolved solids.

Water contains various amounts of dissolved solids such as salts, chemicals and minerals. The presence of these dissolved solids affects the melting point of ice. Pure water freezes at 0 degrees Celsius, whereas impure water freezes at a lower temperature. This means that the impure ice melts faster than pure ice. Impurities also affect the expansion ratio, which increases with increased purity levels. Since volume increases when ice expands, more fluid will be displaced when purer ice forms within a given container.

Material of the container

The material from which the container is made can also affect the freezing speed of cubes. For example, if you freeze ice in a plastic jar, it will freeze faster than in a glass jar or metal container. The fact is that plastic is a very good thermal insulator, so it does not allow additional heat transfer from outside the container and keeps its contents cold for longer than other materials do. 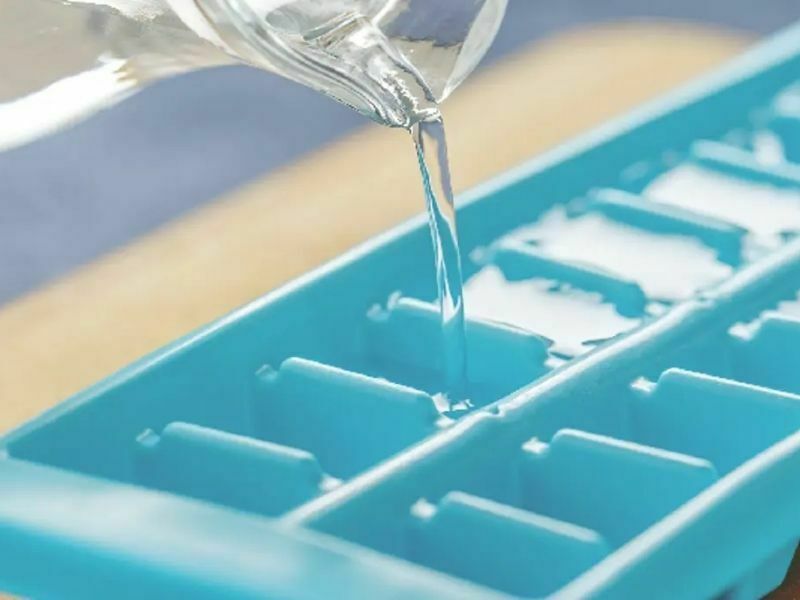 If you’re in a hurry to have some ice for your drink, but you don’t want to wait for the ice tray to freeze. And then, when it does take for the cubes to freeze, you wonder why the slot is not full of cubes. What’s going on?

There are several things that can go wrong with your ice cube trays. Maybe they’re damaged and need replacing, or maybe they’ve been in the freezer too long and need cleaning. Maybe they were made incorrectly and were never meant to work well in the first place.

Before filling the ice trays with water, run them under lukewarm water to warm the trays up. While this may seem counterintuitive, it actually helps make ice cube faster. We know that hot water freezes faster than cold water. But since you’re not going to use hot water for making your ice cubes, you can simply wet the trays with warm water. This will absorb the heat from the ice tray and in turn, help freeze the contents of the tray faster.

Hot water cools faster than cold water, so filling your trays with hot water can make a significant difference in how long it takes for the ice cubes to set. This is because the temperature difference between your warm kitchen and the hot water is greater than it would be if you used room-temperature or cold water. If you don’t want to use hot water, fill your ice cube trays with very cold tap water instead.

This tip is similar to the first one on our list, but here we’re talking about pouring hot water over your filled trays as opposed to filling them with hot water. The heat from the hot water causes a fast temperature change that makes the ice freeze quickly. This is also a good way to get rid of any air bubbles floating in the center of each cube before they freeze, which will give your cubes a clearer appearance once they’re frozen solid.

Stick Your Tray in the Freezer Upside Down

The water at the bottom of your ice cube tray is going to freeze faster than the water at the top, since it’s closer to the freezer’s cooling elements. To speed up freezing even more, turn your ice cube tray upside down so that all the water freezes from the bottom up. This will also prevent any impurities in your tap water from floating to the top and ruining your cubes’ purity.

If you keep your freezer filled with food and beverages, then it’s harder for the appliance to freeze anything quickly, since there’s less empty space for cold air to circulate around. You can make room by removing some of your freezer’s contents (and putting them in a portable cooler or insulated bag if you’re leaving home) to give yourself some extra storage space and let your freezer run at its peak performance level.

Use a Plastic Tray

A good way to make sure you have plenty of ice cubes on hand is to keep two or three large, plastic ice cube trays in your freezer at all times. It’s best to use a tray designed for making large ice cubes, since these typically yield fewer but larger cubes overall.

It’s easy enough to pick up a set of two or three trays at any major grocery store; they usually cost less than $10 total.

Adding salt or alcohol can accelerate the freezing time of your ice cubes. Salt lowers the freezing point of water, so adding it to your trays before putting them in the freezer will cause them to freeze more quickly than normal. Alternatively, you can add alcohol such as vodka in place of some of the water to speed up the freezing process since alcohol freezes at a lower temperature than water does.

If you’re looking to keep your food cool while traveling, ice cubes can be a great solution. But how long do ice cubes stay frozen?

The answer depends on several factors, including the size of the ice cube, the temperature of the freezer and how many times the freezer door is opened.

Size of the ice cube

The larger the ice cube, the longer it will take to melt. That’s because it takes longer for heat to penetrate into the center of a large ice cube. However, if you freeze water in a thin layer, like an ice tray, it will freeze more quickly and will melt faster than a regular-sized ice cube. That’s because there’s less water in a thin layer, so heat can penetrate it more easily.

The temperature of the freezer

Ice melts when the molecules in its surface absorb enough heat to change from solid to liquid form. The colder the freezer, the slower this process happens—that is, if your freezer is set at 0 degrees F instead of 5 degrees F, your cubes will stick around longer.

How many times the freezer door is opened.

Previous ArticleAir-Cooled Vs. Water-Cooled Ice Machine: What Is The Difference?
Next Article Can You Microwave Solo Cups?

Can you freeze vinegar?

Can You Freeze Salami?

How to Preserve Cilantro: 10 Awesome Tips!

Can You Freeze Almond Milk? And How To Store It?