Atlantic Salmon Vs Sockeye Salmon: Everything You Need To Know About The Fish

You may come across the names Atlantic salmon and sockeye salmon in your life. Both seem to be near-identical fish-bearing similar color and flavor, but their origins are not at all similar which demands you to know about them. If you want to learn about the differences between the two, keep reading. 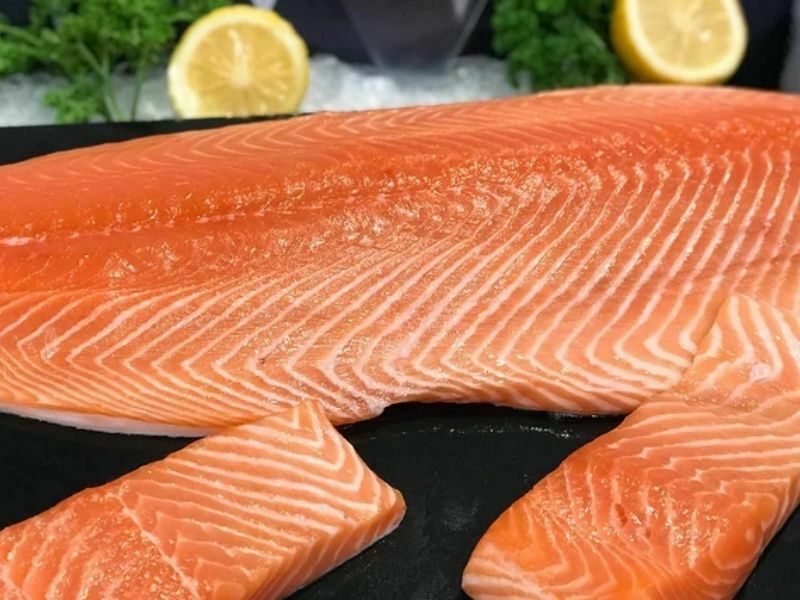 The sockeye salmon (Oncorhynchus nerka), also called red salmon, kokanee salmon, or blueback salmon is an anadromous species of salmon found in the Northern Pacific Ocean and rivers discharging into it. This species is a Pacific salmon that is primarily red in hue during spawning. They can grow up to 84 cm (33 in) and weigh 2.3 to 7 kg (5.1 to 15.4 lb). Juveniles remain in freshwater until they are ready to migrate to the ocean, over distances of up to 1,600 km (990 mi). Their diet consists primarily of zooplankton. Sockeye salmon are semelparous, dying after they spawn. Some populations, referred to as kokanee, do not migrate to the ocean and live their entire lives in freshwater.

Atlantic salmon are anadromous fish which means they spend their adult lives primarily in the ocean and return to freshwater streams and rivers to spawn. Spawning takes place between December and May in freshwater. In seawater, it can reach a maximum size of about 66 cm (26 in) and weigh about 5 kg (11 lb). In freshwater, it can grow to about 1 m (3 ft 3 in) long and weigh about 15 kg (33 lb). The estimated 3 million wild spawning individuals are divided into three main stocks: Northwest Atlantic, Northeast Atlantic, and West Greenland.[4]

The Difference Between Atlantic Salmon And Sockeye Salmon

The Atlantic salmon vs. sockeye salmon differences are obvious to those who are familiar with both varieties. However, many consumers confuse the two because they look alike and even share the same omega-3 fatty acids that make them both healthy fish to eat. Learning the difference between the two will help you better determine what type of salmon you want to enjoy at your next meal.

How They are Sourced

The Atlantic salmon is sourced in the wild and can be caught in the Atlantic Ocean or the Pacific Ocean. This fish has a natural pink hue and is a popular choice among chefs for its high-quality meat. It can be served raw, grilled or smoked.

The sockeye salmon is also sourced in the wild, but it is primarily limited to the North Pacific Ocean, particularly off the coast of Alaska. This fish has bright red flesh and is often served baked or broiled with lemon butter sauce.

The texture of the fish is one of the most important things to consider when choosing between them. If you want a flaky, tender fillet that you can cut easily with a fork, then Atlantic salmon is the best choice for you.

On the other hand, if you prefer meatier fish with more bite or chewiness-sockeye salmon would be great! They are both delicious in different ways so it’s really just personal preference here! 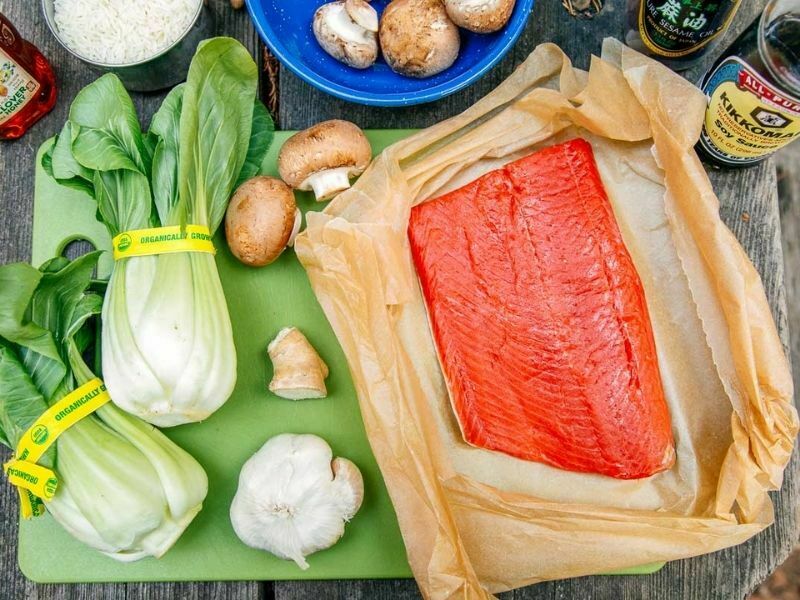 The flavor of Atlantic salmon is less intense than that of wild sockeye salmon. If you’re looking for an intense fishy flavor or prefer a strong fish taste, then wild sockeye is your best bet. If you prefer a milder-flavored fish that’s similar to lake trout or catfish, then Atlantic will suit your taste better.

Consuming a healthy diet that includes plenty of fish, such as salmon, can help reduce your risk of heart disease. Salmon is an excellent source of omega-3 fatty acids, which are beneficial to your cardiovascular system. Both salmon and sockeye salmon are rich in protein and other important nutrients. The amount of calories and fat in both types varies depending on the serving size.

A 3-oz. serving of Atlantic salmon contains just over 3 grams of total fat, including 0.5 grams of saturated fat and almost 1 gram of polyunsaturated fat. It also has about 200 calories, but this depends on whether it is cooked with oil or butter. Atlantic salmon contains about 46 grams of protein, as well as 2 milligrams of iron and 105 milligrams of cholesterol. It is also a good source of vitamin D and B vitamins.

What kind of salmon should i buy?

Both sockeye and Atlantic salmon are well known for their health benefits. However, each type of salmon provides its own unique nutritional profile and flavor profile. Atlantic salmon is milder in taste and provides a higher level of omega-3 fatty acids than sockeye. On the other hand, sockeye has a more robust flavor, which makes it a great choice for flavorful recipes like fish tacos or ceviche.

Is it safe to eat salmon every day?

Salmon is among the most popular of all seafood, and it’s no wonder. It’s a great source of protein, omega-3 fatty acids, and myriad other nutrients. But is it safe to eat salmon every day?

The answer is a qualified yes. That’s because some types of salmon are more contaminated than others. Wild salmon tends to be higher in beneficial omega-3s and lower in contaminants than farmed salmon. Smaller wild salmon (sockeye, keta, and pink) tend to be lower in contaminants than larger species such as chinook or Atlantic salmon. (You can determine whether your fresh salmon is wild or farmed by looking for the country of origin on the label.)

How can i tell if salmon is wild or farmed?

There are several ways to tell if your salmon is wild or farmed. First, look at the color. If you’re buying fresh salmon, the flesh should be a deep orange-red color. Wild salmon gets this hue naturally from eating krill and other shrimp; farmed salmon is fed pellets that contain synthetic pigments.

Another way to tell whether your salmon is wild or farmed is: Check where it came from. The label should include information that tells you where the fish was caught or grown. If you see Alaska on the label, it’s wild, because there are no salmon farms in Alaska. Wild salmon from the U.S. may also be labeled “Pacific.” Farmed salmon tend to come from Chile, Scotland, Canada, and Norway. In general, the farther away your fish has traveled, the more likely it’s been frozen and thawed repeatedly before reaching your dinner table — which affects flavor and texture.

Why is salmon so expensive?

There are a handful of reasons why salmon is so expensive. We’ll explore each one individually here:

The fish are expensive to raise. Raising salmon is not cheap and a lot goes into it. According to the Aquaculture Stewardship Council, the total feed conversion ratio (FCR) for farmed salmon is 1.1-1.8. This means that for every pound of feed given to a salmon, you get 1-1.8 pounds of salmon meat in return. For comparison, chicken has an FCR of around 2 pounds of meat per pound of feed, pork clocks in at 4 pounds per pound of feed, and beef takes 7 pounds of feed to produce just one pound of meat. While chicken and pork have a higher FCR than salmon, they also have much lower costs associated with raising them than salmon do (see below).

Feed prices are high. Farmed salmon need to be fed when they’re young and cannot survive on the natural food sources in their environment like other wild fish species can; this means that they must be fed a special diet consisting mostly of fishmeal and fish oil which can be expensive to produce as well as environmentally unsustainable if not managed properly (source: The Guardian).

Is sockeye or Atlantic salmon better?

Sockeye salmon is a better choice than Atlantic salmon since it’s lower in fat and higher in omega-3 fatty acids.

According to the U.S. Food and Drug Administration (FDA), sockeye salmon contains about 8% more omega-3 fatty acids than other types of farmed salmon, including Atlantic salmon. Omega-3s are essential fats that benefit your health in many ways. They can help lower your cholesterol, protect against heart disease and reduce your risk of Alzheimer’s disease, among other things.

In the end, both salmon species are rich in omega-3s and essential nutrients such as vitamins A, B complex, C, D, and E, selenium, and iron. Plus, both sockeye and Atlantic salmon have antioxidant properties and high amounts of phosphorus, which help support healthy muscle development, according to the Harvard School of Public Health. That being said, choosing which one is right for you all depends on what you value most in a food source – sockeye salmon is generally perceived to be more sustainable than Atlantic due to its lower levels of contaminants.

Previous ArticleHow To Press Tofu: A Step-By-Step Guide
Next Article How To Reheat A Smoked Turkey The Right Way